Log in here if you're a member Add your name to the Smashing Life waitlist to be the first to know when doors reopen:

Everything you’ve ever wanted in a Jewish community

Live your Jewish life, your way

Learn Jewish rituals that will fill your life with purpose

Advance in your life and career An environment of opportunity and support – with Jewish values

Smashing Life is the global, non-judgemental, warm and inclusive community club where ALL Jewish and Jew(ish) women are welcome, hosted by Karen Cinnamon, founder of Your Jewish Life and Smashing The Glass.

Ready to jump into the Jewish community of your dreams? No cliques. No judgement. Just pure Jewish joy and deep connection from a community that empowers you to build the life you want – on your terms. 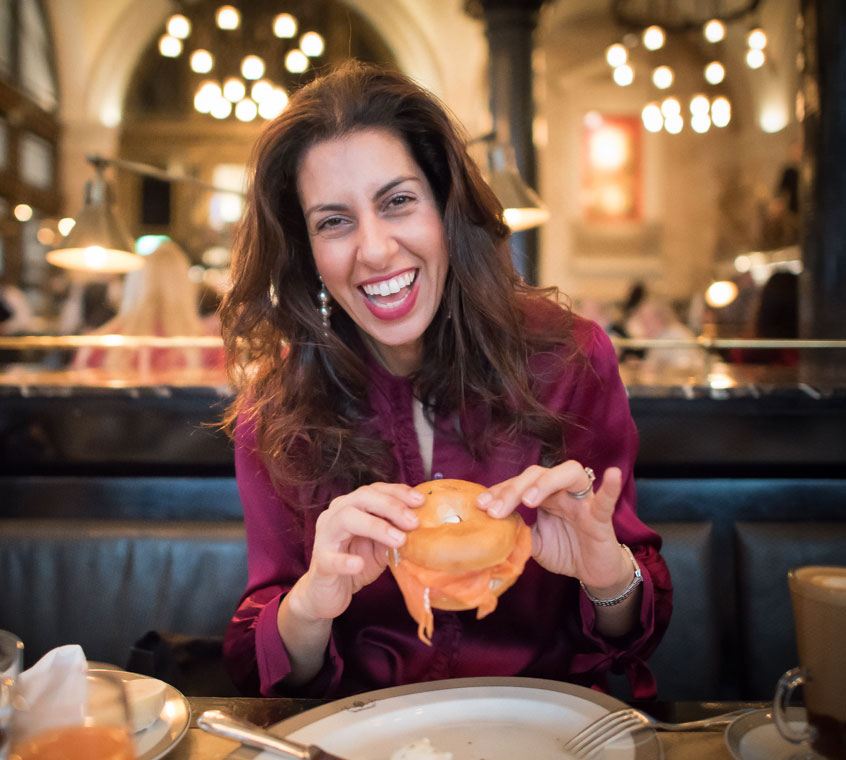 Described as the “Jewish community I always wished for in my adult years” by Sam, one of our much-loved members, Smashing Life is designed to build connection and identity, as well as advance in your life and career, empowered by a supportive joyful community.

“I was struggling to find a space that felt curated for me and my needs as a Jewish adult, and wanting to create a space for myself and my future family that felt true to my Jewish identity. Smashing Life gave me that power and inspiration.”

Here’s what’s waiting for you inside Smashing Life:

Smashing Life is a place to nourish your own personal development while connecting with other like-minded Jewish women – around the corner and across the globe.

It’s a membership community jam packed with everything you need to build meaningful Jewish friendships and build the life you want – on your terms.

Inside Smashing Life there’s a sense of closeness and community. In our supportive nurturing non-judgmental environment, no matter what’s going on in your life, we’ve got you.

And because of our global community, there is always a 3am friend (or several!). Your middle of the night is another Lifer’s day time. We’re better together, stronger together and take deeper risks when we feel part of a supportive, nurturing collective.

24/7 you can throw out a question – whether it’s looking for a product recommendation or something more serious like advice for dealing with a family or work issue – we’ve got you covered so you can feel empowered – all day every day.

And whilst you can talk about ANYTHING inside the safe space of Smashing Life (nothing is off limits), we focus on the following themes in the form of masterclasses, Q&As, and in-person and virtual meet-ups:

“Smashing Life is an absolutely magical community that provides connections to kind and supportive Jewish friends all over the world, masterclasses to help guide us with life hacks, accountability partnering, yummy recipes, twice weekly Zoom yoga sessions and Zoom get togethers (and in-person get togethers in non-pandemic times). With offices in NYC and London, we curate non-judgemental, warm and inclusive online Jewish spaces to inspire you to build the joyful Jew(ish) life you want – on your terms – in the company of like-minded women across the globe.

HOW IT ALL BEGAN

Eight years ago, I was running a successful digital and branding agency, and busily planning my Jewish wedding…. well trying to!

You see, during the planning process, I felt excluded from the mainstream wedding industry as a modern Jewish woman.

Everything was tailored to non-Jewish weddings, and what Jewish press and platforms I could find were old-fashioned and out of touch.

So in 2013, just after I got married, I founded Smashing The Glass to fill the gap I’d experienced.

Within two years it became the world’s biggest Jewish wedding platform – and still is!

Now in 2021, eight years later, we are a fabulous team of five with offices in London and New York City.

In addition to the main Smashing The Glass platform, we have a wildly successful members club for Jewish and Jew-ish brides, called Brides Club that we founded in 2018.

And it’s the incredible community aspect of Brides Club that fuelled me into creating Smashing Life, the Jewish lifestyle community membership club for ALL Jewish women.

In July 2019, Smashing Life was born and Smashing Lifers take the sense of community, identity, sisterhood and belonging to a whole new level.

The connections, progress, joy, purpose and empowerment seen daily makes Smashing Life  so powerful, yet the feeling inside is simply like “coming home”.

I invite you to join me and 400+ fabulous Jewish women inside Smashing Life. Let’s do this! 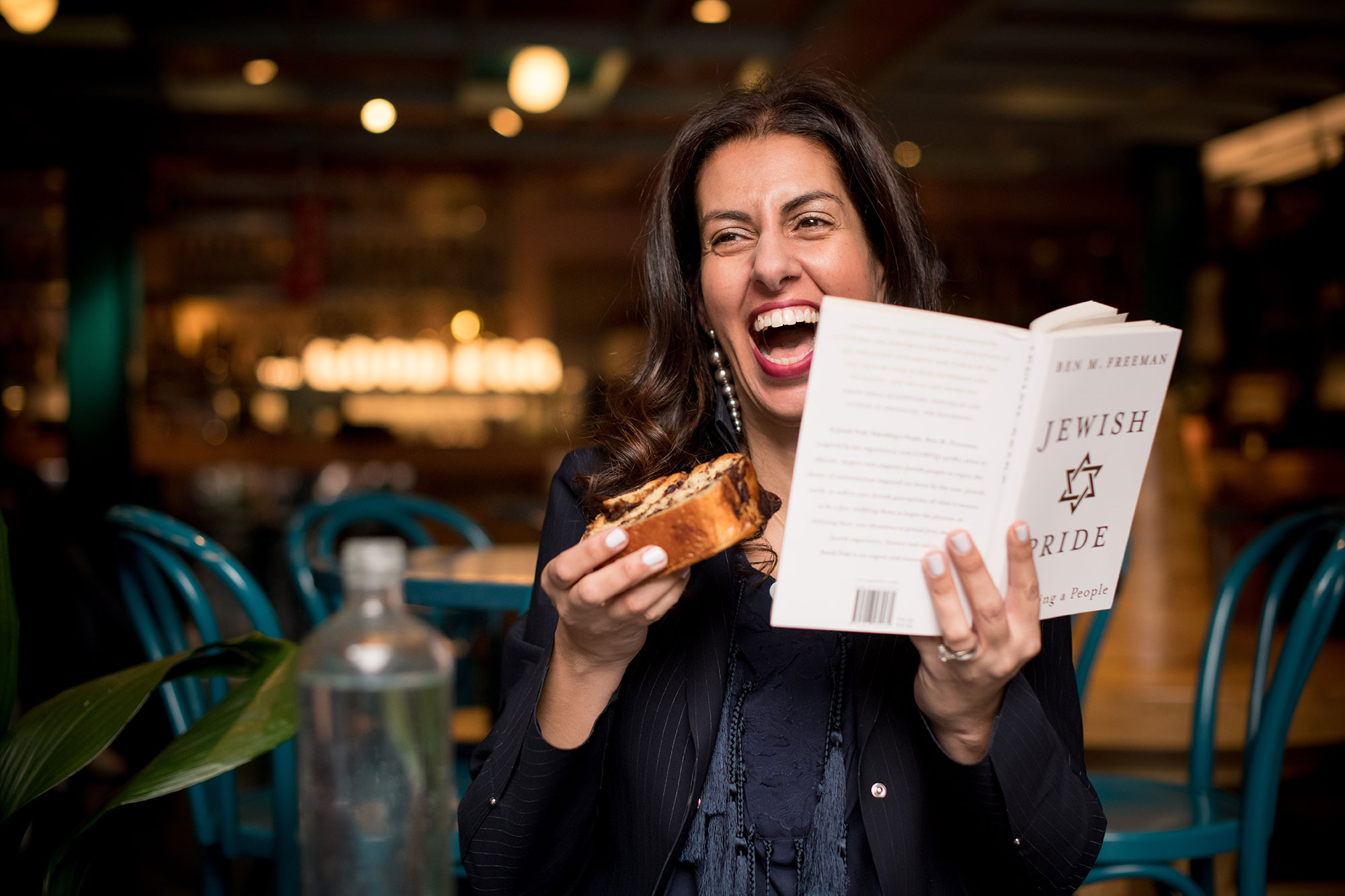 As a Smashing Lifer you get ongoing perks and discounts, from our favorite brands and small Jewish businesses covering shopping, lifestyle, wellbeing and more. New discounts are added every month so the fun just keeps on getting better!

On top of this, you’ll gain front-row access to the Smashing Life team and give your input on our exciting new products, programming, and initiatives.

“Inside Smashing Life ideas, experiences and advice are shared freely and without judgement by an incredible group of Jewish women across the globe. I’m often looking for how to create my own Jewish home and traditions in a modern way (and not just repeat what I was taught growing up) and am forever inspired by the discussions and activities in SL, which ultimately strengthens my Jewish identity.

I love the fun get-togethers, masterclasses, resources, and of course friendships. It’s the ultimate Jewish sisterhood for the modern, online, global generation!

There’s no contract or hidden costs and you can cancel at any time at the click of a button.

The price will be going up in 2022 as we add new features and resources to reflect the fantastic variety of benefits on offer, but you’ll forever be locked in at your sign-up membership price for as long as you stay with us.

What is Smashing Life?

Smashing Life is everything you’ve ever wanted in a Jewish community. It’s a membership club jam packed with everything you need to build meaningful Jewish friendships and build the life you want – on your terms.

Smashing Life is designed to build connection and identity, as well as advance in your life and career, empowered by a supportive joyful community.

Founded by Karen Cinnamon, founder of Your Jewish Life and Smashing The Glass, we’ll work together to take you from overwhelmed to bold and unapologetic.

All within a non-judgemental, warm and engaging members-only online community with in-person meet-ups.

I’m a patrilineal Jew / in the process of converting to Judaism / the partner of a Jew – is Smashing Life for me?

Smashing Life is an inclusive Jewish space. We welcome patrilineal Jews, in-progress converts and those considering the conversion process, as well as those still exploring how they connect to their Jewish heritage, and partners of Jews. It goes without saying, we also embrace ALL Jewish women – traditional, cultural, liberal and any other way we care to label our identity. However, Smashing Life is not a space for Messianics.

What is included in the membership?

How do I join?

Doors to Smashing Life are currently closed. Add your name to the waitlist here to receive the link to join as soon as doors re-open

Can you break down the membership cost?

Joining Smashing Life is one of the best possible investments you can make in yourself and your dreams. The expansiveness, support, warmth, and opportunity you will feel is going to blow your mind.

NB. The membership price will be going up next year as we add new features and resources to reflect the fantastic variety of benefits on offer, but you’ll forever be locked in at your sign-up membership price for as long as you stay with us.

I live in the USA / UK / Canada / Australia / Another part of the world – Is Smashing Life for me?

Absolutely! We are a global community and pride ourselves on having members from all over the world. In fact it’s one of our pluses as someone is ALWAYS awake to talk / support / celebrate with you if you have something on your mind at 3am your time.

That said, the majority of our members are from the USA, but we have many, many members from all across Europe, UK, Canada, Israel, South America, and Australia. Come join in the fun!

How long does membership last?

We have two membership options – annual (you’ll get two months free) and monthly. Depending on the membership type you prefer, membership lasts one year or is month by month. There is no contract with either  – and you can cancel at any time.

We welcome all Jewish and Jew-ish women wherever you live, whatever stage of life you’re at, and whatever age you are, but please note that the vast majority of our members are between the ages of 25 – 45.

Is a trial membership available?

While we do not have a trial membership option, you can sign up for one month of Smashing Life to see what it’s all about!

Can my company or community partner with Smashing Life?

Please drop us a line at emily@smashingtheglass.com with any partnership enquiries.

If you are ready…

… for connections and friendships that will last a lifetime

…. to advance in every area of your life

…. to build the life you want – on your terms

…to be part of a group of Jewish women to connect, engage, and share life’s struggles and triumphs

… to facilitate connections that can be taken offline, whether you want to start a new creative project, meet new people, or if you’re considering moving to an new area or town…

…You are ready for Smashing Life. 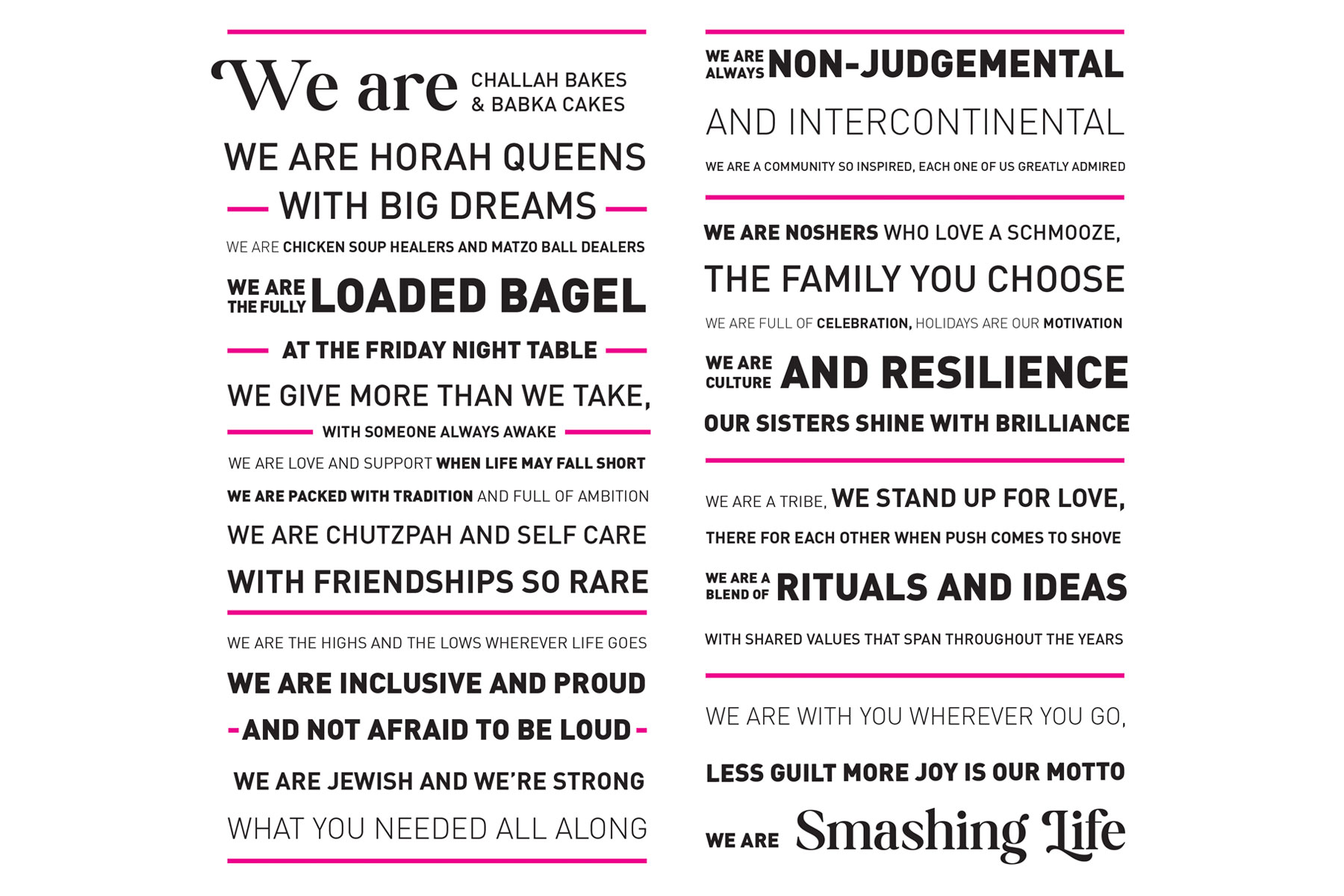